Andrew Young being attacked by white segregationists during a night march to the historic slave market in St. Augustine. 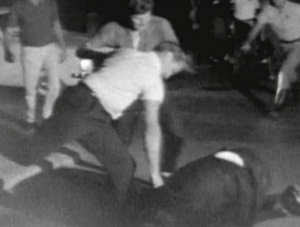 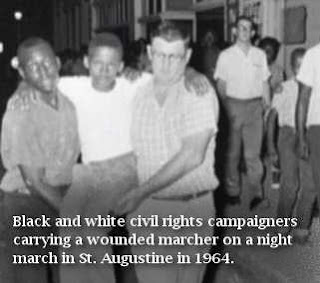 We noticed this quote from Barack Obama recently, from a speech he gave at Howard University, September 28, 2007, and we thought it was worth blogging:

“The teenagers and college students who left their homes to march in the streets of Birmingham and Montgomery; the mothers who walked instead of taking the bus after a long day of doing somebody else's laundry and cleaning somebody else's kitchen — they didn't brave fire hoses and Billy clubs so that their grandchildren and their great-grandchildren would still wonder at the beginning of the 21st century whether their vote would be counted; whether their civil rights would be protected by their government; whether justice would be equal and opportunity would be theirs. . . . We have more work to do.” 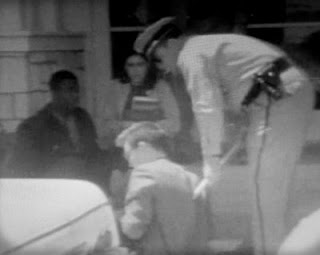 This quote brought to mind this shot, taken from film footage in Dare Not Walk Alone. It shows three students, one black and two white, at a non-violent protest against segregated dining. The police officer is using a cattle prod to "enourage" one student to get into the police car. Eventually, all three students were taken into custody. Interestingly, James Brock, the owner of the restaurant that was the site of the protest, asked the police to stop using cattle prods on the protestors (and they complied).

Jeremy just got back from events at Mercyhurst College and Notre Dame University. Both went really well. There were over 200 students at one of the screenings. He did several classroom visits and conducted Question & Answer sessions after each screening, receiving a lot of thanks and encouragement.

(If you would like to book the film on your campus or want to get in touch with Jeremy for an interview please email speaker@dnwa.info.)

There's no doubt that the topic of race in American politics is a hot one right now, on news networks as well as on campuses, even as the two presidential campaigns steer clear of the subject (which we totally get, I mean neither Obama or McCain want to bring this up, at least not directly).

But if we have learned anything from the four years we have spent working on the Dare Not Walk Alone project it is that what people say in public and what they think in private can be very different when the topic is race. And don't you get this feeling that many Americans are holding their breath over this election? They are just hoping that race does not play a role in the outcome. We want to believe we are past that. But we're just not sure.

We know a lot of Obama supporters are worried that the Bradley-effect may still be very real. ("Named for Tom Bradley, an African-American who lost the 1982 California governor's race despite being ahead in the polls--the Bradley effect refers a voter tendency to tell pollsters they are undecided or likely to vote for a black candidate but on election day they vote for his/her white opponent."--Wikipedia)

Pundits and so-called experts appearing all over TV this weekend kept saying the Bradley effect is a thing of the past. But they obviously haven't spent much time living and working in North Florida, where you will find a lot of white people are still angry over the forced desgregation of their once "separate but equal" communities.

We think the reason Jeremy is earning the respect of students at these campus events is that he is an expert. If you spend five years of your life making a documentary about racial issues in American society you've defiintely earned that title. We think folks like CNN, CBS, NBC and BBC America should be talking to Jeremy, not political pundits. And they should be showing clips from Dare Not Walk Alone, where you can almost feel the hatred of white Americans back in 1964, Americans who actively opposed equal rights, with bats and chains and boots. (Those civil rights marches weren't awareness building exercises like a rally for the environment--there was, as Commissioner Errol Jones so wryly points out "opposition.")

And 1964 was not that long ago when you think that some of the white kids attacking blacks on the beaches of Florida back then are just turning 60 this year. As Jeremy's brilliant interview with James Brock in the film makes clear, many of those people are not apologetic for the role they played. But very few of them are as honest with the public as Mr. Brock was with Jeremy in that interview.
.

A good article about Dare Not Walk Alone in the South Bend Tribune by Jeremy D. Bonfiglio today. The film is being shown shown Friday and Saturday as part of the Worldview Film Series at the University of Notre Dame’s DeBartolo Center for the Performing Arts.