Greetings Texas! The award-winning indie documentary Dare Not Walk Alone will be showing on Thursday, January 24 at 7 p.m. in Hughes-Trigg Theatre on the campus of Southern Methodist University as part of the schoool's Rev. Dr. Martin Luther King, Jr. Week. Please tell as many people as you can about this event. (Location is 3140 Dyer Street, Dallas, TX 75205)

Dare Not Walk Alone tells the story of the 1964 "war of ideas" in St. Augustine, Florida, that led to the passage of the first civil rights bill on July 2 of that year; events never before documented in this fashion; events that speak to the heart of the current political debate over race in America and the role of Dr. King, who was jailed in St. Augustine, versus that of President Johnson (tapes from the LBJ White House are heard in opening scene of the film).

Described as the "most gritty version of civil rights history" put on film, Dare Not Walk Alone has been acclaimed by film festival audiences across the country. It offers a rare look at Dr. King's non-violent campaign tactics in action and shows the tremendous courage and heroism required of those who put them into practice to break a political stalemate and give America a landmark law, desegregating hotels, restaurants, swimming pools and other public places, as well as establishing the federal entity that has probably done more than any other to bring equality to working Americans, the Equal Employment Opportunity Commission.

If you can encourage people to attend, and to vote at IMDB, you will be helping this important film obtain wider release. Thank you!

Vote for Change! Vote for DNWA at IMDB?

Most people who watch Dare Not Walk Alone agree that it is a great agent for positive change and many ask what they can do to help the film reach a wider audience. Some have asked if it would help to vote for the film on IMDB, the Internet Movie DataBase. The answer is: Maybe.

If you have seen the film, then please vote. A good score at IMDB generally helps a film get more exposure, which is what Dare Not Walk Alone needs if it is to fulfil its role as an agent of change.

But you should NOT vote for a film at IMDB unless you have seen it, and you should NOT vote more than once, even if you own several different email addresses. You should also avoid voting with a new email account from yahoo or gmail. If you violate these rules and guidelines then your vote might actually lower the score that IMDB lists for the film. That's because IMDB, which is owned by Amazon, the world's largest Internet retailer, goes to a lot of trouble to detect and deter vote stuffing (and also movie bashing).

If IMDB didn't do this, their rating system would be meaningless and so the technology behind the scoring is very sophisticated. For example, suppose someone wanted to hurt a movie. They might create a bunch of free email addresses at Yahoo then cast a bunch of low votes. But IMDB can detect foul play like that and will give less weight to those votes.

Of course, the most powerful vote you can cast is the one in November, at the ballot box. So please be sure to register to vote now! 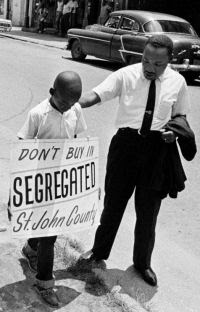 Could America use some perspective on the heated exchanges that followed former first lady Hillary Clinton's LBJ/MLK remarks on the presidential campaign trail last week? Probably.

A good step forward would be to watch Dare Not Walk Alone, the civil rights documentary that shows what really went down on America's streets to force LBJ to pass the Civil Rights Act of 1964. Here's what Mrs. Clinton said:

“Dr. King’s dream began to be realized when President Lyndon Johnson passed the Civil Rights Act of 1964. It took a president to get it done.”

Some African-American residents of St. Johns County, Florida, might disagree that it took a president to get it done. They marched for months, were harassed and beaten back for months, and in some cases spent months in jail, to make the point that a civil rights act, languishing in congress, was truly needed.

Words alone cannot evoke the feelings that were in the air at that time, feelings that come rushing back when you watch black bathers attacked with bats and chains by angry whites on the segregated Florida beaches. Where was the president then? And when the owner of a local motel poured acid into his swimming pool to force out "integrated bathers," here's what LBJ said:

"Foreign policy and everything could go to hell over this."

Those remarks, from White House tapes, never got much air play. The swimming pool incident was widely-reported, but the events leading up to it were not. And the media has never revisited the scene of these events in any depth. We made Dare Not Walk Alone to change that.

This blog is not the place to pass judgment on presidential candidates. But the coverage of this topic in the press has made it clear that too few people in America know what was really going on in 1964. It is our hope that Dare Not Walk Alone will change that.
.

Here's wishing everyone a great 2008! We appreciated all of your support during 2007 and hope to see some of you on the cinema circuit when Dare Not Walk Alone enters limited theatrical release in 2008 (watch this space for dates and places).

And we hope you see the progress you are looking for in this New Year. May it be a year of great change for the better for everyone.