20 Words Worth Your Choice of T-Shirts

One of the drawbacks of a low-to-zero budget movie is that the director can't afford to travel to all the great places that the film is screened. This is the case tonight. Nobody from the film could afford to be there in Milwaukee. However, we think some readers of the blog will be there and one of them will get a DNWA t-shirt IF they send in a 20 word report on the screening.

What we are looking for is word on how well the screening was attended and what the general reaction to the film was like. We are looking for honesty (if there are only 5 people in the audience we want to know--we will be crushed, but we want to know). If there are more than 5 people then we don't expect you to interview them all, just write down your sense of how the screening went. If you feel moved to send more than 20 words, that would be great, but the only person guaranteed a t-shirt if the first one to email their report to info "at" dnwa "dot" info.

(We put out the address this way to prevent spam software from reading it. We only ask for 20 words so that folks smart enough to text our email address from their cell phone can compete. SMS abbreviations allowed but message must be at least 150 characters long. We will not count any messages received before the end of the film. We strongly discourage use of cell phones during screenings. You may send your report as a comment on this blog post. Do not include personal information like your address in a blog post. Judges decision is final. All entries become property of DNWA).

The Jena 6 and Dare Not Walk Alone

Recent events in the small Louisiana town of Jena, symbolized by the Jena 6, raise two questions that Dare Not Walk Alone may help to answer: What is the nature of racism in America today? How can we eradicate racism?

An article on this topic has been posted on the DNWA web site. We hope it makes a constructive contribution to the conversations that are now taking place across the country.
. 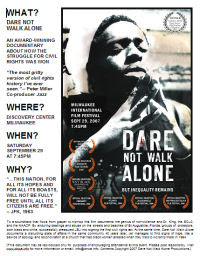 Here it is, the latest addition to our zero-budget PR momentum tool box. It might look small, but in real life it is 8.5 x 11 inches and, with your help, it can have a big impact.

And here's the idea. Anyone who wants to help get out the word about the screening in Milwaukee on the 29th of September can download the Acrobat .pdf file of this poster and print off as many copies as they need. Put one on the bulletin board at school or in the library. They also work well in shop windows and as fliers handed out on the street.

A big turnout for this screening will not only help the film secure a wider release, it will also let the world know that people still care about social inequality and racial injustice. 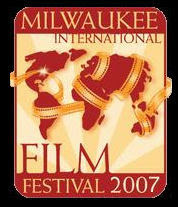 Dare Not Walk Alone will be playing at the Milwaukee International Film Festival on Saturday, Septepmber 29th 7:45pm.

We really appreciate the chance to share this film with you, and we really like the festival's description of the film: "Jeremy Dean’s fearlessly honest and socially prescient documentary reveals the untold history of the civil rights movement in St. Augustine, Fla., and the ongoing conflict in the city. Martin Luther King Jr.’s fight for equality led to a battle to integrate a local motel, culminating in a horrific incident in which the motel’s owner poured acid on protesters. More than 40 years later, a group of African-American teenagers in St. Augustine dream of a better life, trying to survive troubled homes, failing schools and a justice system that is stacked against them. Dare Not Walk Alone attempts to bridge the gap between the ideals of the civil rights era and the contemporary struggles of the hip-hop generation."

What's a Cucalorus? A prestigious festival of independent film held every year for 13 years now in Wilmington, North Carolina. We have just learned that Dare Not Walk Alone is booked for the festival, which runs from the 7th to the 10th of November (2007). Click here for details of the festival. Right now we are not sure of the date and time of the screening but will update the blog as soon as we find out.